I thought lawnmower racing was purely a redneck sport, but apparently not. With the world record speed currently at 80 mph, the UK's Project Runningblade aims to squash it at 100 mph. 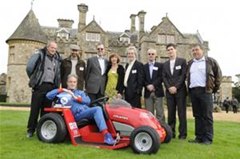 "Project Runningblade, launched at the UK's Beaulieu National Motor Museum this week aims to raise the world record to more than 100mph using a highly-modified Countax-based machine. At that clip, it could cut an entire soccer pitch in 2 minutes and 42 seconds not to mention setting world records for both speed and eccentricity.

The project is headed by Stephen Vokins, who has worked at Beaulieu for 27 years, and has something of an appetite for the eccentric. 'I saw a video of American, Bob Cleveland on YouTube setting the record for lawnmowers at an impressive 80.792mph on Bonneville Salt Flats,' he said, 'and I was greatly impressed, but felt with the right team, 100mph should be possible.'"

Want to master Microsoft Excel and take your work-from-home job prospects to the next level? Jump-start your career with our Premium A-to-Z Microsoft Excel Training Bundle from the new Gadget Hacks Shop and get lifetime access to more than 40 hours of Basic to Advanced instruction on functions, formula, tools, and more.

Other worthwhile deals to check out:

Join the Next Reality AR Community

Get the latest in AR — delivered straight to your inbox.